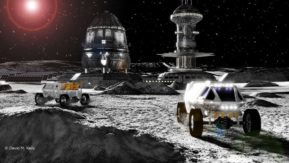 Space is strange. Space is big–very, very big. It’s cold, it’s hot, it’s dangerous, it’s tranquil. It is everything and nothing. In short, it is so different from where we are now that only the noisiest of authorities would find it well received. But above all else, scifi architecture is the strangest. I’ve been doing […]

When I’m writing a story I build up a collection of images that act as references for what’s in my head.  Much of the time these are things I find on the web, but as I write science-fiction sometimes I just can’t quite find anything that looks right. Or sometimes I want to work through […]

Three Lives Of Mary  By  David M. Kelly Copyright © 2016 by David M. Kelly Mary gasped as her legs were ripped from under her and she slammed face down into the ground. Several tendril-like vines wrapped around her arms and legs and she instinctively pulled against them. Thorn-like bristles clawed at her burnished skin […]