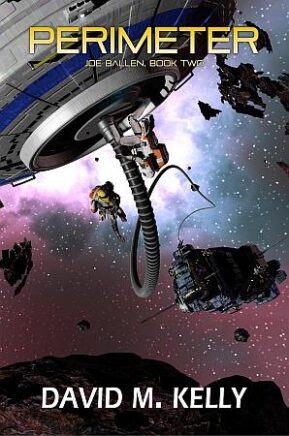 The book is full of humour, excitement, occasional sadness, and there are plenty of surprises.

Ignite
Just finished reading Perimeter! So fast paced a book that it is difficult to put it down . You are hooked and just want to see what will happen next. A great read!!

L. Cronin
Dammit David Kelly, you'd better write fast because I want to know what happens next. If it were possible, this book is better than book one.

Bruce
Just read the 2nd book in the series and hope a 3rd comes along soon. Lots of fun, well-paced, good read - really enjoyed them both

PERIMETER – Deceit has no boundaries

Joe Ballen’s working on a new ore-processing platform in the harsh environment around Mercury. When a savage Atoll attack decimates his crew, Joe is injured and must return to Earth to recover. While it’s a setback for the project, at least it means he can rebuild his relationship with his wife after nearly a year away.

But then the security forces come calling. Vital starship engineering files are missing, and without them Earth has no hope of escaping Atoll domination. Someone has to locate the files, and Ballen is bulldozed into the not-so-choice assignment.

But he’s not the only one in the hunt. As Joe struggles to find the data, he becomes tangled up in a high-stakes game of cat and mouse. It’s a journey that will take him to the perilous depths of space, where no one is quite what they seem. Can old enemies ever make good allies? And can Joe trust even the people closest to him?

Ballen’s back in another action-packed sci-fi noir thriller, guaranteed to keep you turning the pages.