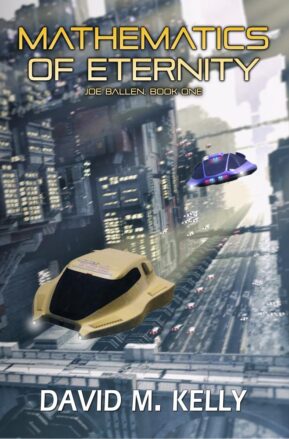 I loved this book, not just for the fast pace and tension but for the dystopian view of life on Earth in the near future.

London Citizen
The worldbuilding was amazing, the science plausible, and the story engaging. I would highly recommend it.

Indie Sci-fi fantasy
For all you readers of science fiction, this is a fantastic , fast-paced, action-packed book. The plot is carefully crafted with a great feel for suspense. I had been looking to read a real page turner and I found it!!
L. Cronin
In the tradition of twentieth century sci-fi masters, Kelly tells a tale of a bleak yet cool future but with a modern update. Earth is done for. We've destroyed the planet. Water levels have risen dangerously, and winter is a mostly forgotten memory. And yet there's hope.
C. McMullen
Previous
Next

A grisly death, a disturbed scientist, and a dangerous conspiracy.

Joe Ballen dreams of returning to space, but after an accident left him half-crippled, he scrapes a living flying cabs in flooded-out Baltimore.

When one of his passengers suffers a grisly death, Joe is dragged into a dangerous conspiracy centered around a prototype JumpShip. No one believes the ship will work, not even the space-faring Atolls who have barricaded Earth from the rest of the solar system. But someone is murdering everyone connected to it.

As the bodies pile up, Joe becomes suspect number one, and his enemies will stop at nothing to hide the truth. With the help of a disturbed scientist, a senile survivalist, and his glamorous boss, can Joe untangle the puzzle and uncover the truth before he becomes another statistic?

You can ask Joe anything, except to give up.