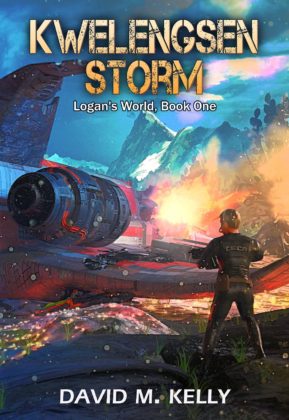 If you think the only thing to read from this author is about my good friend Joe you are going to be presently surprised. This book had me on the edge of my seat, staying up for way to long flipping the pages as fast as I dared. I have to admit this author has made a fan of the woman who doesn’t do science fiction and space travel. This author has made it fun and exciting and I can’t wait for the next release so I can dive back in.

T. Hicks
Wow! This book grabs you & won't let go. Some of the action scenes left me breathless and exhausted, in a good way! The main character, Logan, is so fierce in his determination to fight for what's right, you can't help rooting for him. I also loved the characters of Heskith and Havji and hope they will return in future books. This is a spin-off from the Joe Ballen series, with a bit more of a military sci-fi flavor and slightly more serious in tone, but certainly not without moments of humor. Overall, a great read for anyone who enjoys action adventure sci-fi with compelling characters.

H.J.S
This book follows Logan Two Feathers as he works on another planet that earthlings are colonizing, and the power struggle that ensues when different factions try to claim the Planet for themselves. Will Logan be able to save the people and himself? Read the book to find out. A great read and I'm looking forward to the second book in this series

You can turn your back on war, but sometimes it refuses to let you go.

When Logan Twofeathers takes on the job of head of engineering on Kwelengsen, the first habitable planet discovered by Earth, he thinks he’s leaving conflict far behind. But when he investigates the loss of a deep-space communications relay, his ship is attacked and crash-lands back on the planet.

With his new home destroyed by the invaders, Logan is stranded deep in the frozen mountains with an injured sergeant who hates him almost as much as the enemy. Against the ever-present threat of capture, he must battle his way through icy surroundings in a treacherous attempt to find his wife.

And when he’s forced to ally himself with a disparate group of soldiers and their uncompromising captain, Logan must face the reality that he may have lost everything—and everyone—he loves. Will he choose to fight? And what will it cost him?

Kwelengsen Storm is the first in a gripping, new sci-fi thriller series from the author of the Joe Ballen novels.