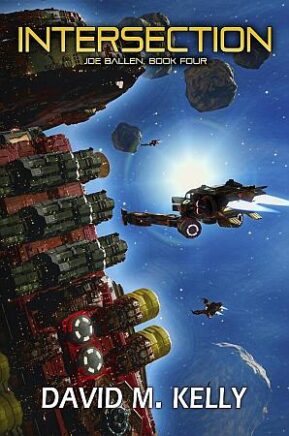 Joe Ballen and Dolly do it again! I really enjoy the Joe Ballen series. They are all action packed with plot twists you don’t expect!

M. McNaughton
I’m a sucker for a good conspiracy, and I love flawed characters. This author knows how to deliver both. You can’t help but root for Joe Ballen. I really enjoyed unraveling the clues and playing detective with him.

Cynthia S.
I enjoy both Kelly’s vivid imagery, especially during the big scene, and the characterization shown in Joe through recurring quirks. Romance in the novel is every bit as scifi as the central plot. Joe’s boss really is the complete package!

Shane
In the tradition of twentieth century sci-fi masters, Kelly tells a tale of a bleak yet cool future but with a modern update. Earth is done for. We've destroyed the planet. Water levels have risen dangerously, and winter is a mostly forgotten memory. And yet there's hope.
C. McMullen
For all you readers of science fiction, this is a fantastic , fast-paced, action-packed book. The plot is carefully crafted with a great feel for suspense. I had been looking to read a real page turner and I found it!!
L.Cronin
This series combines good old space opera with a light touch humour. Well plotted, well paced and with central characters you start to root for. Just superb writing.
London Citizen
The worldbuilding was amazing, the science plausible, and the story engaging. I would highly recommend it.
Indie Sci-fi fantasy
An amazing, non stop thrilling sci-fi action adventure. Never a moments respite and this is one book you just won't want to put down.
STK
Previous
Next

Where deception and betrayal meet…
Joe Ballen is taking it easy as head of engineering on the new giant space station at Alpha Centauri, or at least as easy as it ever gets for Joe. One thing he’s sure of though—he’s out of the hero game for good. But on a routine visit back to Earth, one of Joe’s oldest acquaintances is killed in front of him. Followed almost immediately by an attack. Forced to take desperate measures, Joe survives by the slimmest of margins.

And when he uncovers a secret message from an unusual source, Joe must undertake a deep space journey filled with deceit and danger to uncover the secrets behind the murder and attacks. But with a potential war looming, can he survive long enough to find the answers?

The thrilling climax of the Joe Ballen series!