When I was younger on family vacations with my siblings, you could guarantee that within an hour of setting off, we’d be chorusing the phrase “Are we there yet?” much to the annoyance of our parents. They’d do their best to keep us occupied, making up games along the way, and we’d always have a few books with us. A far cry from the mobile entertainment we have now! My dad, always the joker, would tease us, asking if we could smell the sea yet (or claiming that he could) or see Blackpool Tower, or some other landmark at our destination.

Now I live in Ontario, Canada–a province far larger than England–where distances are so large that we talk about them in terms of time, rather than a number of kilometers.

So, where I live is, for example, five hours north of Toronto. We’re also two hours west of North Bay, and Ottawa is about five hours east. Of course, the travel speeds vary depending on traffic, (and how far someone is willing to risk getting a ticket!), but these averages work well for most people to get a feel for how far somewhere is.

So, how does distance in space measure up?

Let’s channel our inner Carl Sagan–or Neil deGrasse Tyson–and imagine we have a spaceship that can take us anywhere we want. We need to be comfortable during the journey, so let’s say that this spaceship can accelerate at one g (1g). This is the rate of gravity we feel here on earth, and what our bodies are accustomed to dealing with. In low g environments such as the ISS, astronauts have to be careful of problems such as muscle wasting and bone loss over long time periods, so we want to avoid that.

So we have a ship that can accelerate at a constant one g, all the way to our destination. Of course we want to stop when we get there so we can look around, buy postcards, check out the local nightlife etc. Which means we also have to slow down, so we don’t just zip straight past our destination. To do that and still keep our 1g acceleration-induced pseudo-gravity, we need to decelerate at the same rate. So, what we end up doing is accelerate for half the distance, then decelerate for half the distance. Like this: 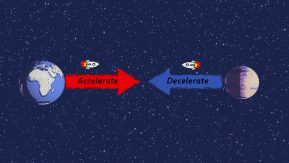 This will get us to our destination in comfort, then we don’t need to worry about things like being too weak to party when we get to the Martian nightclubs, or failing to harvest all that kelp in the oceans of Jupiter…

So how long would it take to get places?

Well, the moon is approximately 360,000 km away.  So, if we calculate the acceleration and travel time, we get a travel time of just over three hours. Wow, the moon is closer than Toronto!

Interesting too, looking at the velocity at the midpoint, our ship would reach an impressive speed of over 213,000 km/h. That’s traveling at a fair old clip for sure.

Let’s see. How about Mars? That’s where everybody wants to go, isn’t it? Well, Mars is roughly 56 million km, so at a constant 1g acceleration and deceleration, the journey would take 41 hours, or about 1.75 days. Not exactly a quick run down to the local store, but manageable. The midpoint speed would be around 2.6 million km/h, certainly fast enough to satisfy any speed junkie (even me!)

So, how do the other planets measure up on this scale? Well let’s see:

None of the figures there look beyond the realms of possibility for a bunch of intrepid explorers, do they? Even Pluto is only 16 days away by these terms, and Eris, the furthest planet we know of in our solar system, is just over three weeks away. Pretty “close” when you consider the average time for people to cross the Atlantic in the 1700s was about 7 weeks.

The speed or velocity at the midpoint for these journeys looks impressive. For Eris, at a distance of over ten billion kilometers, the highest speed reached is a staggering thirty-six million km/h! This compares with the New Horizons probe (the fastest so far launched) which had a heliocentric (Sun-relative) velocity of “just” 162000km/h–less than 200th of the calculated Eris journey top speed. Also, to give another perspective, this is “only” three percent of the speed of light.

So why don’t we all start hopping about the Solar System at will? Well the elephant in this particular room is fuel. A rocket has to carry all of its supplies, including fuel (plus atmosphere and food for a crewed ship) on-board. If we could create a fusion engine, turning Hydrogen into Helium with near perfect conversion of energy to propulsion, a 25 tonne spaceship would require 215 tonnes of fuel to make the journey, and as yet we haven’t succeeded in creating any kind of sustained nuclear fusion reaction. If we assume a more practical fuel conversion of perhaps half that, the amount of fuel for the same ship would jump to 431 tonnes. And at current possible technologies, the fuel conversion rate amount would be closer to 1% of that, leaving a spaceship that requires over 21500 tonnes of fuel. Plus if it was chemical rocket powered we’d need approximately twice as much oxidizer to burn the fuel, adding another 49000 tonnes. This would mean the ship would be well over 99% fuel and oxidizer.

Perhaps that could be done. The whole thing would need to be built in orbit, and would certainly strain our resourcefulness but it would be an incredible sight and a fantastic achievement. Imagine the visuals as the first astronauts send back video of their first steps on Pluto or Eris. They’d be genuine heroes. Especially as we just sent them to their deaths… we didn’t allow for any fuel to get them back! If we don’t want a glorious sacrifice, we’re looking at nearly 45000 tonnes of fuel and over 10000 tonnes of oxidizer.

What happens if we look further out? The nearest star system to us, Proxima Centauri, is 4.3 light-years away. Using the same figures as above, this would mean that the crew’s travel time would be 5.9 years, as measured on earth. Though because of relativistic time dilation, their elapsed time would seem to be just 3.56 years. The speed reached in the midpoint of such a journey would be 95% of the speed of light, and at this speed the ship and crew would shorten to about one third their usual length, before contracting to normal length on arrival. Fuel required would be 12 million tonnes, with 27 million tonnes of oxidizer–for a one-way journey.

This is one of the things that makes writing realistic science fiction so challenging. In my Joe Ballen series, I imagine a couple of technology breakthroughs to help, which allows the ships in those books to accelerate at 0.3g almost constantly, the trick being that they use Casimir-effect (Zero-point energy fields) to create energy out of virtual particles. This eliminates the need for the fuel, but will only work in outer space–the reactors won’t function in an atmosphere and so are useless for landing and taking off from earth. So Joe, Dollie, and Logan can move around most of the solar system in a few months, but that’s as quick as they can get using “normal” engines.

As my dad might have said, “Can you smell the green cheese yet?” 😉