If you can imagine two astronomy research teams having a hypothetical conversation then one of them might go something like this:

Voyager Team: We’ve redefined what we know about the outer planets in the solar system. How do you beat that?

I’m lucky enough to have been able to follow some of the most amazing space missions and discoveries during my lifetime, starting with watching the first Apollo moon landings, and progressing through a whole litany of other space firsts.

One of the high spots was the amazing Voyager journeys that launched in 1977, achieving their first big goal two years later-a flyby observation of Jupiter. (important scif-fi note: these dates also coincide with the releases of the first Star Wars movie and the first Star Trek in 1979–when Voyager returned as V’Ger!)

The probes were launched to take advantage of an alignment of Jupiter, Saturn, Uranus, and Neptune. The impact of the Voyager missions was incredible. Until that point, we knew little about the detail of the large gas giants in the solar system, and collectively both probes provided us with the first close-up pictures, leading to the discovery of a number of new moons around the four planets.They also provided numerous other data and observations that changed our picture of these distant worlds, and the environments around them.

At the time, Pluto was still designated as a planet, and Voyager 1 was launched on a trajectory that could have included the most distant world in its mission. The decision was taken, however, to include a close flyby of Titan, Saturn’s largest and most interesting moon which, unfortunately for people who considered Pluto the most distant planet of the solar system, meant the icy world would remain a distant blurry spec. And when the International Astronomical Union(IAU) reclassified Pluto as a “dwarf planet” in 2006 it seemed hope for a mission was gone.

But luckily that wasn’t the end of the story. Known only to a few people, a separate mission to Pluto was conceived by Robert Stahle, a scientist from NASA’s Jet Propulsion Laboratory who actually called Clyde Tombaugh (the discoverer of Pluto) to get permission to visit his planet. A team led by Alan Stern was set up in 2000 to design and build a probe that would investigate both Pluto and the outer solar system. This became known as the New Horizons project. And after issues with funding, the project finally kicked off in 2002 with the probe being launched in 2006, just months before the IAU’s decision to demote Pluto.

With a launch speed of over 58,000 km/h, the New Horizons probe was described as “the fastest spacecraft ever launched” and also the first craft launched directly into solar escape velocity (the Voyager probes among others have also achieved the necessary speed but used gravitational assists from planets).

Of course, the problem with going to Pluto is that it’s so far away, in human terms. To paraphrase Douglas Adams, it’s not just a trip down to the shops. In New Horizons’ case, it took fully nine years to reach Pluto. During much of its journey the probe spent its time in hibernation to conserve its capabilities. It’s hard to imagine how frustrating and nerve-wracking it must have been for those involved during this period–knowing your mission was asleep and wondering if it would ever wake up again when it was needed. 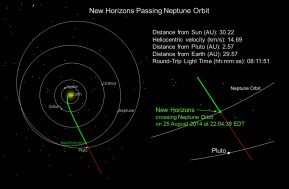 But wake up it did! On the appropriately freezing December 6th, 2018, the team sent the signal to wake up and the probe replied with a  signal the following day. Early signs were promising, but then just ten days before closest approach, the probe went into safe mode preventing any scientific observations. It’s not hard to imagine the stress the team must have endured as they struggled to understand the problem and resolve it on a ship over four billion kilometers away! I was following the mission daily and fully admit to having a lump in my throat as well! 🙂

The glitch was quickly understood and as it was something that only occurred as part of the approach preparations, it was determined that it wasn’t likely to happen again and the mission was back on. And the results were stunning. To illustrate this consider this was the best image we had of Pluto in 1994. 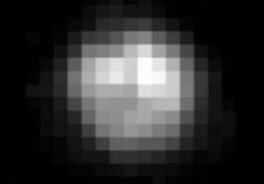 Not a lot to look at, huh? Well, here it is after New Horizons. 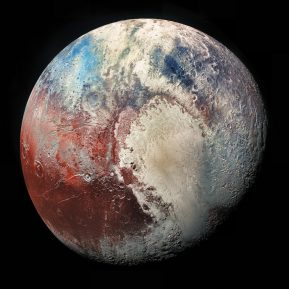 Completely remarkable. For the first time ever we could see Pluto as a real living planet, with details of the surface, conditions on the planet, the detection of an atmosphere, mountains of frozen water, an incredible heart-shaped region, and much more. Not only that but its moon, Charon, which had only ever been a single dot, now was show to look like this!

How could anybody deny Pluto was indeed a “real” planet after this?

Like many others I was literally in awe seeing these images for the first time. Ever since I was young, Pluto had always been the edge of the solar system, the “Ninth planet,” but now it was shown to be a unique and fascinating world in it’s own right. How much did we learn? The data gathered by New Horizons was so detailed that it took over fifteen months to download the complete set and included the discovery of four further moons of Pluto.

To Pluto And Beyond!

You’d think that would be enough for one team, but the mission wasn’t over.  A new target was searched for that could be reached by the probe and in August 2015, a Kuiper Belt Object (KBO) known as (486958) 2014 MU69 was selected as a target for a flyby and given the nickname Ultima Thule. We know little about Ultima as yet, but we’ll soon know much more. The countdown is on, and the closest flyby will take place on New Year’s Day 2019. You can bet I’ll be glued to the internet looking for the results!

And not only that I have a personal tidbit of news to share. I’ve been following Alan Stern and the updates for New Horizons on Twitter for a while, and a week or so back he announced that the final trajectory change had been executed for the flyby. Being my usual impetuous self I sent a note of congratulations to him and casually asked if there was any chance of being able to target any other KBOs beyond Ultima.

I didn’t really expect an answer–scientists are busy people, and have much more to worry about than answering questions idly popping up on social media. But Stern replied, and hisanswer was just one word: “Yes!” I believe this is the first time that the team have publicly confirmed that there will be more to come from the mission, and am so excited at the news. Here’s to continuing success for the New Horizons team, providing the world with some of the most awe-inspiring astronomy possible!

If you’re interested in finding out more about the mission and team, or following the latest news, check out the team’s website. It’s packed to the gills with everything you could ever want to know and an amazing amount of educational material–http://pluto.jhuapl.edu/ and you can also follow the mission on social media.