Find Out What I’ve Been Up To This Year

It’s been a while since I posted here–I’m a bad blogger, I admit 🙂 . It’s been a bit of a busy year. In May, I went back to England to visit family for several weeks (which seems an incredibly long time ago now!) and since then have promoted my work at two comic-cons and a book festival. In addition I’ve written the first draft of Joe Ballen 3, while working on two other stories. And in-between all of that, I’ve done my best to fit in some vette drives whenever time (and weather) permitted!

It was my second year at Sudbury Graphic-Con–a successful event once again, with lots to see and do–not to mention catching up with some readers from 2017. It was also great to welcome my good friend, fantasy author Richard H. Stephens up north to show off the first two novels in his Soul Forge series. We had a fun time meeting up with him and his lovely wife, Caroline. 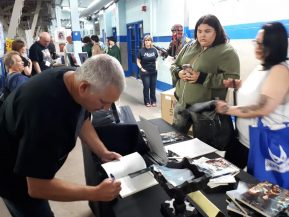 That week, I also did a radio interview for CBC Radio’s Morning North show, discussing my books, science-fiction, and the Graphic-Con event. This meant a very early start to the day–I was live right after the 6 am news. I was so nervous I’m surprised people couldn’t hear my teeth chattering!

Next up was Word On The Street in Toronto. I was tantalizingly close to finishing book 3 at this point and ended up writing until 11pm the night before to get the last part done. WOTS is a large event and I hoped to see a lot of interest. Unfortunately the setup was not ideal, our booth location was away from the main areas, and all in all, it was a little disappointing. That said, I met some wonderful people, including fans who’d already read and enjoyed Mathematics of Eternity–always a treat! I also got the chance to meet and chat with several authors who I’d previously known only from Facebook, including Sharon Sasaki, and Zak Wheeler. 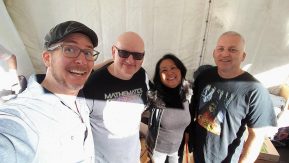 Following shortly after that was the Steel City NerdCon in Sault Ste Marie. This was their inaugural event, and despite the weather starting to turn chilly, there was an enthusiastic turnout, and again it was great to make new friends. Next year’s event looks set to be bigger and in a better location, so I’m looking forward to that very much. If you’re into sci-fi or fantasy related books, movies, or TV shows, you really should try these shows. Everyone is so friendly, and there’s so much to geek out over. 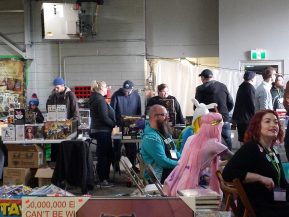 So now it’s time to start work on polishing the next installment in the Joe Ballen series (provisionally and cunningly named  book3! 🙂 ) . This won’t be the last in the series–I already have at least one more in mind–though after book 3 I’ll probably take a break from Joe for a little while and concentrate on some of my other ongoing projects.

That’s all for now, stay tuned!