How to make a low cost banner stand

After I posted an image online of my banner set up from the comicons I went to last year, several people said they’d be interested in how I put it together. So here goes!

The display consists of three main sections, as shown below: 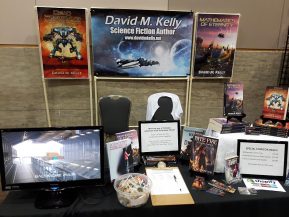 The large author banner I had printed through Vistaprint, an online print provider (visaprint.ca or vistaprint.com, depending where you are). It’s quite heavy vinyl, with precut holes and grommets to hang it. I had this made so I could use it many times over, both indoors and outside, if necessary. The vinyl is strong and waterproof, so it should last a fair while. The image was one I made myself, and sized to 30×48 to match the specs provided by Vistaprint.

The individual book posters were printed and plastic laminated at my local Staples. These are enlarged versions of my book covers, resized to 20×30 inches. I chose this size to match the banner depth. I could have had banners made the same as the main one, but as these are likely to change somewhat frequently, I wanted a cheaper solution. That said, with the lamination, they should hold up fairly well regardless.

Depending where your event is, there may or may not be a handy wall; and even if there is, it’s often the case that you’re not allowed to hang anything from it. So I wanted some frames. I looked at several pre-made ones, but they’re pretty expensive, and as I’m a cheapskate author, I decided I’d try and make my own. 🙂

The frame consists of standard 3/4 inch PVC pipe. I had a little problem finding this as a lot of places now only seem to stock PEX tubing, which is more expensive and a different size (even though they’re both called 3/4 inch pipe!). I found mine at one of the local Home Hardware stores. You also need some fittings to match–bends, straight-connectors, T-connectors, and some stops/blanks. The good thing is that the piping and fittings are all fairly cheap. You may also find you need a PVC pipe-cutter if you haven’t got one–you can use a small saw, but the cutter makes it a lot easier.

I worked on the main banner stand first. It’s a fairly simple H-frame set up, like this: 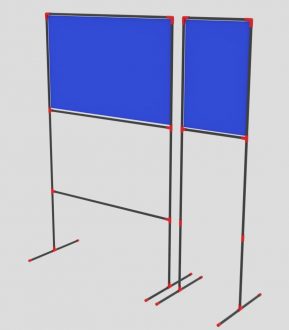 The big banner stand uses 2 corner connectors, 6 T-pieces, and 4 stops on the feet (colored red in the picture for visibility–click to enlarge). The smaller poster stand is similar, but as the posters are lighter I didn’t think I’d need the extra cross-bar, but I did match the cut there and used straight connectors – this keeps the leg pipe shorter, so easier for transport and storage.

The stops on the feet serve to neaten up the pipe, but also level up the pipes, otherwise the T-connectors in the middle introduce a lump and make the stands tip forward or back.

To keep them all together I threaded string through the pieces to tie them together and make it easier to match up– rubber cord like they use in tent poles would be better, but I didn’t have any to hand. The pipe and fittings just press together and are pretty secure, but if you want you can glue some of the sections together to keep things together or stop them popping apart–though be careful not to glue stuff and make a big piece that’s awkward to transport.

I wasn’t too happy with the look of the raw tubes, so I decided to paint them black which gives everything a better “frame.” When painting pvc you really need to use specially designed paint that will “bite” into the surface. After some research I settled on Krylon Fusion paint for plastic–which I could get at my local Home Hardware. The painting was a little messy, but after a few coats it came out not too bad. You can see the results from the latest show below. All in all it cost me maybe $100 or so, and around 3 hours for the initial cutting and assembly , mostly because I’m slow. The painting took a couple of days allowing for things to dry fully. 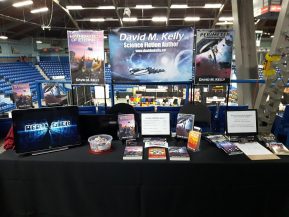 I haven’t included actual dimensions here, because that would depend on what size banner you go with. Whatever size that is, just remember to allow for the pipes to slip inside the connectors and cut appropriately–the distance the pipes insert into the connectors is equal to the diameter of the tube. The good thing is that with the materials being cheap, if you make a mistake it’s not too much of a problem.