When people write science fiction, they’re often extrapolating current technology and devices and looking into the future of what they may become. This can lead to some quite odd parallels as science catches up with what the authors once just dreamed about.

For instance, in 1945 Arthur C. Clarke wrote about “extraterrestrial relays”–geostationary artificial satellites–which were the inspiration for the subsequent development of communication satellites that we now rely on so much.

Similarly, in the 1940s, Isaac Asimov started to write his now famous series of robot stories. Okay, my Roomba vacuum doesn’t quite resemble R. Daneel yet… but as development progresses, you can bet that Asimov’s laws of robotics will figure heavily in ethics debates. And the company U.S. Robotics , which builds high technology devices, including robots, was actually named after Asimov’s fictional “U.S. Robots and Mechanical Men, Inc.” after being inspired by the Good Doctor’s stories. 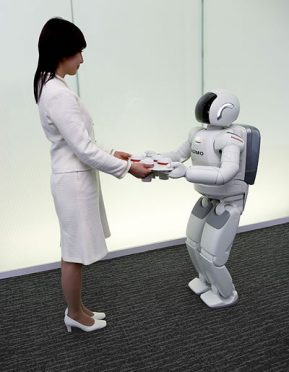 That wasn’t the only score for Asimov. He also created the concept of “Multivac” and used it in several stories. Multivac was a giant computer that straddled the world and contained all of human knowledge. People could access it from anywhere and ask any questions they wanted to–big, small, profound or impetuous. Doesn’t that sound remarkably similar to what we now call the internet and search engines?

Beyond books, Star Trek has inspired many now real-world technologies. First were the automatic doors–the ones that swooshed elegantly out of the way when people wanted to pass through them. On the show these were pulled open on cue by prop handlers, but the TV company had many requests from people asking where they could buy them. At the time they couldn’t, but soon they were being produced and are now seen everywhere from airports to hospitals to shopping malls.

Another Star Trek technology now coming in real world is the medical scanner known as the Tricorder. This device allowed a person (or creature!) to be scanned for a number of readings related to their health and well-being. Again, as life imitates art, a group of doctors are now working to make the device a reality.  Their version is a little more limited than the fictional counterpart, but who knows what a few years of development will bring.

And most recently a new inspiration has appeared from the classic TV show. Who can forget the fantastic “turbolifts” on board the Enterprise? These clever boxes had a similar function as ordinary lifts, but could move not only up and down, but sideways too! Well, German elevator producer ThyssenKrupp is now taking inspiration from this for a new system being tested that would do exactly that–by making use of linear induction motor technology!

In fact the number of devices on Start Trek that now closely resemble actual technologies is remarkable, from computer tablets, small hand-held communicators (cellphones–you can even buy a Bluetooth replica of the original!), Uhura’s wireless earpiece, security applications of biometrics (retina scanning), and even the Universal Translator.

This is the incredible thing about science fiction. When you create it, you’re not just creating something cool and fun–sometimes you are literally creating the future!

Which are your favorite examples of science fiction entering into the real world?