In a little while we’re going to have the “Great American Eclipse”–say it loud and proud and wave those flags! This will be the first eclipse contained entirely within the US, and as such offers the people there a fantastic opportunity to steep themselves in understanding the science and physics behind the event. Unfortunately, some people can’t apparently deal with that..

A few days ago, I stumbled across a video on youtube (I’m not going to promote it by linking to it), claiming that the moon is only seventy miles wide and that the eclipse was some kind of NASA promoted hoax. The “why” aspect of this is naturally 100% sense-free).

The argument goes something like this. If you look at children’s science books discussing the sun’s rays hitting the earth, they are parallel (or as someone put it “at ninety degrees”–hmmm on a curved surface?).. If the sun’s rays are indeed parallel, then the shadow of an object can be no smaller, than the object itself and so, as the path of totality (total eclipse) is around seventy miles wide, then the moon can be no larger than that.

It sounds reasonable at first glance perhaps. But the truth is very different. Here, I’ll let Father Ted explain it: 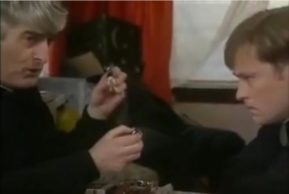 In simple terms, the moon is very small (compared to the sun) and very close, while the sun, is MUCH larger than the moon (or the earth for that matter) and much further away. The one time that a shadow can appear smaller than the object itself is when the light source is bigger than the object producing the shadow. The light rays”creep” around the edges of the object, producing an area not fully shadowed (the region of partial eclipse called the “penumbra”) and an area fully shadowed (called the “umbra”). Here’s an explanatory diagram: 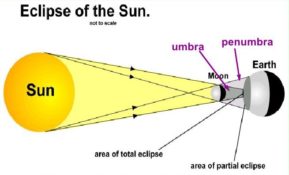 The other thing that has apparently fueled the shrieks of “conspiracy” is the fact that the eclipse will start in the west and travel across the US to the east–with cries of how can this be, when the moon rises in the east and sets in the west t (like the sun).

The explanation for this is just as simple. The eclipse is nothing more than the moon’s cast shadow hitting the earth’s surface. So when the moon is to the east with the sun, the cast shadow can only be in the west. Like this: 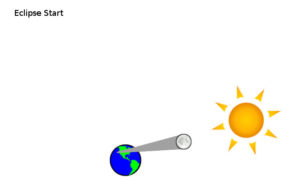 The sun and the moon BOTH rise in the east, so the cast shadow is over to the west. Then, as the sun moves further overhead during the eclipse, the shadow is cast more directly down on the earth’s surface, having moved to the east. 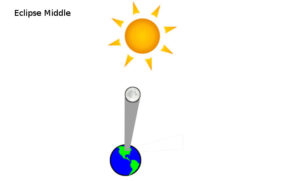 Finally, the sun’s position relative to the earth and moon has moved west, casting the shadow east. I think even Father Dougal could understand that! 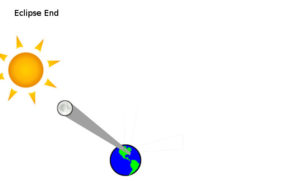 No conspiracy required, just a basic understanding of the real world. The big blunder in all these conspiracy theories is this. The first person (known) to estimate the size of the moon was the Greek astronomer Aristarchus of Samos, who used some clever geometry (and an eclipse!) to estimate the moon and sun’s relative distances and size.

The figure he got for the moon was between 0.32 and 0.40 times the diameter of Earth–which would give the moon a diameter of about 4000-5000kilometers–not a bad estimate considering the limits of the instruments and data he had available (the actual size is around 3500 kilometers.)

So, if there’s some kind of “NASA conspiracy,” it had to start back in ancient Greece–around 2500 years ago! 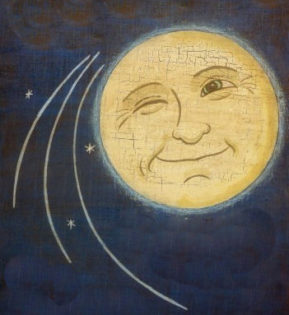