It’s safe to say that as a writer, I spend a lot of time at the keyboard. Actually let’s rephrase that; actually I spend huge amounts of time at the keyboard…. nope, that’s still not accurate… Being an author, I live on the keyboard. Every single day, in fact I’m attached to my computer in a symbiotic relationship like Jadzia had with Dax. There is literally not a single day goes by where I am not here click-click-clicking away.

The first keyboards I used were the old IBM model M keyboards. Man those things were heavy, I mean physically heavy. So heavy that there were special versions of Clue(do) where the result of the whodunit was Colonel Mustard, in the living room, beaten to death using an IBM Model M keyboard. 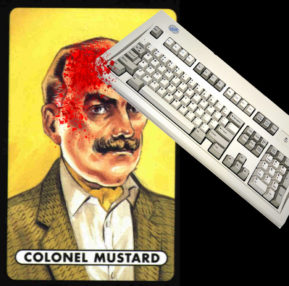 And that sound they made was awesome. Clack. Click. Clack. Clackclick. You really knew you were in the business of typing something important just from the sound alone. The typing equivalent of a Rolls Royce door shutting. Click Click, Clack Clack Click. Thirty years on, these are still available and even now make a great choice for any committed keyboard ninja.

After that, most PCs switched to the cheaper, membrane keyboards. Those horrible blancmange-filled devices worked… sort of… I mean they put letters on the screen when you pressed them, but it wasn’t the same.

So when I started writing professionally, I looked around for something that would bring back that rich auditory memory of serious typing. This wasn’t entirely self-indulgent (honest!) — a good keyboard can really help your typing speed, your creative thought, and they last significantly longer than those cheap membrane things.

After much research I settled on the incredible DAS Model S professional. This stout beastie makes use of the Cherry MX Blue switches, to give you that resistive feel and satisfying CLICK whenever you press a key, and I quickly fell in love with it. I’ve used it happily ever since I bought it several years ago. (If you want the firm feel without the click go with the MX Brown switches.)

DAS does a range of keyboards from the (extremely daunting) Ultimate models with no lettering, to more friendly professional models like the one I chose. Here it is: 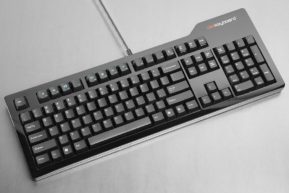 While it looks extremely stylish and feels great, more recently I’ve found the small lettering difficult to read. Also the text is more of a gray on white effect that isn’t obvious in the photo and that also makes it awkward for me (I struggle a little with low contrast colors).

So what to do?

I shopped around and found some vinyl sticker overlays in a large font that looked like they would do the trick and initially I was quite pleased with them. They weren’t especially cheap, but after a few months of (ab)use, I found the downside. The glue isn’t very robust and they started to come unstuck, sliding around on top of the key like an unruly child and needing regular re-positioning. Not ideal for a permanent keyboard jockey like me. Here’s a picture of the mess:

Notice how the lettering isn’t straight and that several are twisted and overhanging? (especially the left CTRL key and in the W and E areas.) And yes, this is a wired keyboard! 😉

So recently I did more research (Yeah! Writer research!) and found several companies that make custom keycaps for Cherry MX switches. In particular, Max Keyboard offered a wide range of styles that looked good, and when I contacted them were extremely helpful and friendly. I didn’t want anything very complicated–large font, pure white on black keys but it turned out that there was a slight hiccup.

I didn’t realize when I bought the DAS Pro that it had a slightly non-standard key set-up that didn’t match the keycap layouts offered by Max. I thought I was out of luck, but after a few emails were exchanged, I found they could do a custom set to match my keyboard for a modest price. The helpful and quick responses made it an easy choice, and I ordered my set happily. The great service continued and the keycaps arrived quickly, despite my out-of the-way location. Then all that was necessary was to swap the keys over.

This was relatively straight forward. First, I arranged all the keycaps in their correct layout to make it easier to swap them over correctly. Max supplied a puller to make getting the old keys off fairly easy. One thing to be aware of on the DAS keyboard:the larger keys (Shift, Enter etc.) have a wire stabilizer that hooks onto two white “eyes” that plug into holes on either side of the central mount that presses onto the actual switch itself. Unhooking these and reattaching them is a little tricky. Also, the eyes have to be transferred from the old keys to the new and they’re “handed” –they have an offset that only works if it’s the same way as the original way they were mounted –so make sure you copy the way they’re facing when you move them. If you don’t, the keys will bind. 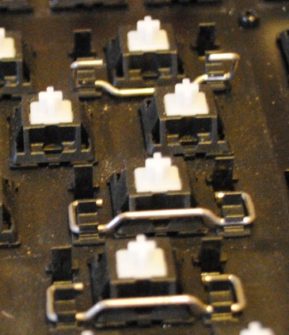 Overall, it took me about an hour to switch everything. Be prepared to find out just how much gunky debris there is under the keys on a typical keyboard and clean it out!

I’m very pleased. The keyboard looks much better than the vinyl stickers and feels just as good as ever. Plus with the large font and pure white, they’re easier to see than the original ones. All in all, a great update.

Max Keyboard does a range of colors styles and even graphic designs if you want. They also offer a complete bespoke service if you want to go wild, or have a keyboard that matches a specific app, or set of gaming keys, I’d heartily recommend them. Here are a couple of the more brightly colored options: 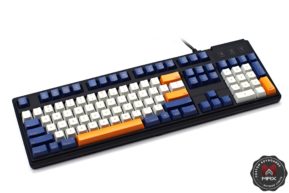 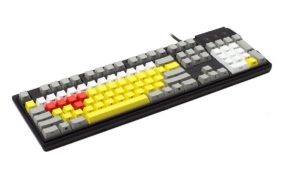 Have fun upgrading your keyboard and feel free to share pics of your custom set-up if you upgrade! And if you don’t have a mechanical keyboard yet… well, what are you waiting for? Max Keyboard offers their own version that looks just as good as the DAS version, but with all the benefit of the custom options.

And if that doesn’t convince you, how about this? 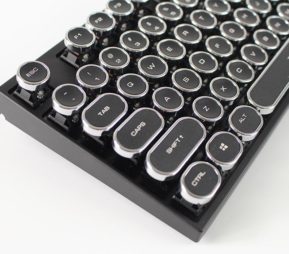 Yes, old -school typewriter keys on a modern cherry MX keyboard! You can find these on Ebay and similar sites, I have no idea how good they are, but they sure look cool!

And to think, at one time a keyboard was just something for typing on! Have fun!