It’s finally here! The day the world has been waiting for! After many eons in development, Mathematics Of Eternity, the first in an explosive SF thriller series is available! Be the first kid on your block to get your hands on a copy! 🙂 It’s got everything: flying cars, mysterious women,spaceships, genetic engineering, sinister space villains, and a conspiracy that’ll make your hair curl! (Did I get in enough exclamation points? 🙂 ) 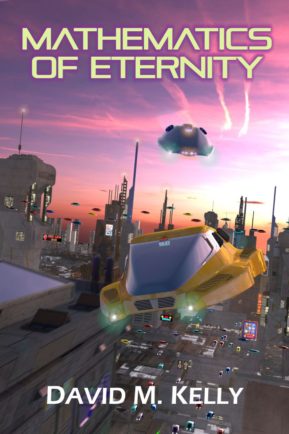 Meet former space engineer, Joe Ballen. These days, he’s scraping a living flying cabs in flooded-out Baltimore, trying to avoid the clutches of his boss and the well-meaning advice of an old friend. When one of his passengers suffers a grisly death, Joe is dragged into a dangerous web of ruthless academic rivalry centered on a prototype spaceship.

As the bodies pile up, Joe becomes suspect number one, and his enemies will stop at nothing to hide the truth. With the help of an enigmatic scientist, a senile survivalist, and the glamorous Ms Buntin, can Joe untangle the conspiracy and prove his innocence before it’s too late?

Mathematics Of Eternity: The future’s about to get a lot more action-packed!

“Negotiations between the assembled Earth nations and Atoll negotiators broke down today, with no relaxation of the restrictions on Earth-based extra-orbital operations. General Chadwick, from the combined Atoll security forces, stated there would be a vigorous response to any attempt by Earth to increase operations outside Low Earth Orbit, other than the Mars mining operation. He also said that this boycott included the starship—”

I stabbed the off-button hard enough to make the plastic click sound like a gun had gone off inside the car. The news shouldn’t have bothered me, but it did. The fact that I used to work in space was part of it—the fact that I couldn’t any longer was another. But mostly it was because the Atolls were right—we didn’t deserve another chance.

I pulled up outside The Kase waiting for the traffic lights to change. The rain on the windshield distorted the garish neon and holo-projections from the bar into painful tracks that burned ghostly afterimages on my retina. I rubbed my face to ease the ache in my eyes, a two-day growth of beard rasping against my palms. Time to polish yourself up a bit, Ballen, otherwise someone’s going to think you stole this cab. It had been that kind of night. The only thing keeping me going was the thought that my tour was over for another twelve hours.

The cab bucked and I grabbed the shuddering controls, wrestling the car into a level attitude. The door hissed open as someone slid in the back. The turbines whined as the stability systems fought to compensate for the shift in weight distribution and for a second I thought we were going to plummet to the ground. […] Read More