It’s incredibly interesting to see the newest developments in nanotechnology. The research holds so much promise for development in materials’ science that the possibilities are almost boundless. Imagine for example, clothes (or even buildings!) that can never get dirty. Imagine super-strong, super-light conductors that could rewire electricity grids and make them fifty times more efficient. Or how about adaptive armor materials that could be strong light and flexible, and yet protect a soldier from a bullet–or a car’s occupants in a collision.

One of the fantastic possibilities in this area is the development of molecular self-assembly, where materials actually grow into objects”spontaneously” because they are designed to do that. We see this effect in nature in the formation of everything from chemical molecule to crystals and even entire galaxies, but now we’re on the verge of being able to control and shape these processes directly into creating things that are useful to us.

In Mathematics Of Eternity, I imagine a community of space-living humans who dominate the Earth from giant “Atolls.” These Atolls are not built in the traditional way, but instead are grown through a self -organizing process, much like crystals are created but on a much larger scale. The idea is that as the population of the Atoll increases, they would “bud” new areas to provide room for the extra people.

The new volumes would create themselves from a “seed” and a supply of the appropriate raw materials, forming chambers, walls, and basic infrastructure components such as ducts, walkway,s and partitioned spaces. Once the growth is complete, people and machines would move in and finish the process to make the space habitable. How much of the basic construction could be achieved this way? That’s hard to speculate on, but in my imagination I think something in the order of sixty percent.

I imagined the Atolls looking like a kind of futuristic snowflake, the growth process constantly being extended in multiple directions to maintain a balance to the structure, and each new section being grown on to existing sections. Here’s a render of what was in my head when I came up with the idea. 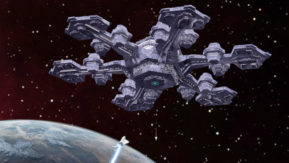 While much of this is fanciful, architecture as a whole is on the verge of an explosion of new ideas and concepts, only made possible through the use of these new materials. A few years ago almost no-one had heard of 3D printing and now not only can you buy small desktop versions for the same price as a computer but we also have the first 3D printed buildings.

Imagine the process as the crystalline buds grow, organizing themselves in to the shapes and forms needed to create a station in space. Swarms of robots, both at a macro level but also at the nano-scale, guiding and nurturing the process.The end result? A building, or a skyscraper, or a space station.

Perhaps my vision isn’t so far off after all.