It’s really exciting to see more developments on the flying car front and demonstrations such as the autonomous flight displayed by the Cormorant from Urban Aeronautics. For SF obsessed people like myself, the concept of flying cars has been a dream for at least the last fifty years. And who can possibly forget the Jetsons? 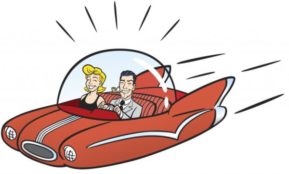 Unfortunately, reality has been a few steps behind the dream for quite a while. But now we’re on the verge of breakthroughs in materials technology, computational capability and lightweight power-sources hat will finally turn these symbols of the future into everyday conveniences!

From my perspective, this is not only something I’ve waited to see since being a kid. It’s also an idea that features heavily in my up-coming novel Mathematics Of Eternity, in which my lead character flies cabs in twenty-second century Baltimore.

In my future vision, flying cars–or aeromobiles as I call them–are common-place, partly for convenience, but also because coastal cities have been flooded to a greater or lesser extent, due to rising sea levels and as a result moving around on the ground is seen as a somewhat risky endeavor.

The first of the links above talks about some of the challenges involved with such vehicles. Don’t expect these to be controlled solely by humans. By necessity they will be semi-autonomous, with the drivers “guiding” them, but also paired with traffic management systems to cope with the mass of low level air-traffic. As well as avoidance systems within the vehicles, there would undoubtedly need to be some kind of centralized coordinating system to ensure safety of the vehicles themselves, as well as general safety of the populace. I envisage different control zones, where the cars are allowed to be more independent outside urban zones and more controlled over cities and dense population areas, in much the same way that we have more rigidly defined (and enforced) regulations covering regular cars at the moment.

What’s kind of cool to me, is that while I was working on my novel I came up with an idea of what my lead character’s cab might look like and to my eye, it’s not too different in configuration from the Urban Aeronautics Cormorant! Take a look: 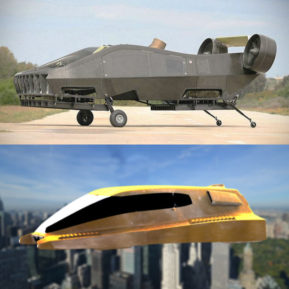 In my design, I shrouded the turbines (thinking of safety in an urban environment) but, overall I think they have a similar layout. Also remember that the current designs being tested are really at the dawn of flying car technology. I’ve no doubt they’ll evolve significantly the way cars have. But at least we’re finally seeing the first steps to flying car heaven!