Space is strange. Space is big–very, very big. It’s cold, it’s hot, it’s dangerous, it’s tranquil. It is everything and nothing. In short, it is so different from where we are now that only the noisiest of authorities would find it well received.

But above all else, scifi architecture is the strangest.

I’ve been doing some 3D modelling recently while putting together a trailer for my upcoming novel, and as a result I’ve been browsing a lot of concept art. There are some incredibly talented artists out there, but something that often baffles me is the vision of space architecture.

By that, I’m not talking about external ship design. We have no idea what such ships might look like–not having developed warp drive, hyperdrive, or any of the endless variants yet–so any guess is pretty much as good as any other (although most spaceships/starships will consist largely of fuel tanks and radiator fins, and as such are unlikely to have much in the way of pleasing aesthetics.) But when it comes to scifi interiors… Well, take a look at these:

The image on the left  is a Victorian era bedroom. Note the fancy arched doors, the ornate multilevel ceiling with complex carved wood and plaster detail. Can you imagine the cost, in terms of both labor and materials, to build this now? Then compare it with the modern bedroom on the right: standard, square, uniform door sizes. While still a comfortable room, it represents a fraction of the effort required to build the first. And yet, according to modern scifi shows, we’re led to believe that future rooms will look like this: 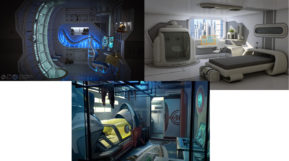 To move around their ship or station, our scifi heroes have to pass through the dreaded scifi corridor (of doom?). A corridor in the real world is a somewhat mundane affair, almost always rectangular and usually laid out with 90 degree corners at intersections. This isn’t just happenstance; these general limits are the best overall fit for human shaped objects to pass through. They’re also economical in terms of materials, easy to construct and maintain.

But what has happened to the standard simple corridor in the world of SF? Well, it appears that it will go the way of functional pockets in women’s clothing (Hi, Christina!) Humanity will collectively lose all knowledge of 90 degree angles, flat surfaces, and perpendicular walls. 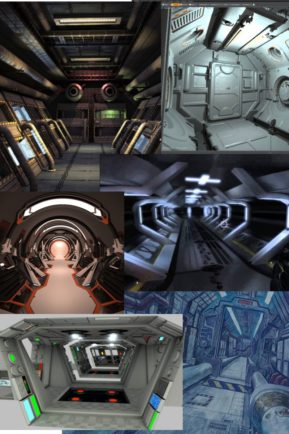 Hexagons and octagons are apparently de-rigeur in the late twenty-first centuries onward. Oh and pipes of course. You know the things I’m talking about… pipes, tubes, anti-matter conduits, vulnerable control circuits etc. Hell, let’s just leave those out in open view where any schmuck with a hammer can attack them.

It didn’t used to be like this. Back when Star Trek first aired, corridors were… well, kinda sensible: 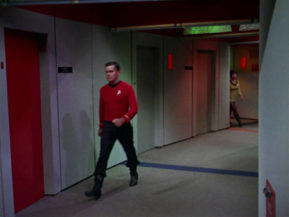 Okay, they probably weren’t going to win any color-scheme awards and they had some odd decoration here and there, but they were functional. Sure, they were curved to presumably follow the curve of the main hull, and some parts of the ship had odd shaped examples (engineering) where perhaps there were other constraints. But by and large, people-corridors were people-friendly and familiar. But now? 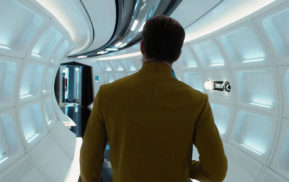 Huh? It’s like living on the inside of a dirt bike tire painted white (of course!) or maybe a drug inspired vision of Dali-esque waffle-iron hell. And jeez, I pity poor Scotty and the engineering team trying to maintain those “billions and billions” of hidden lights buried in the walls. 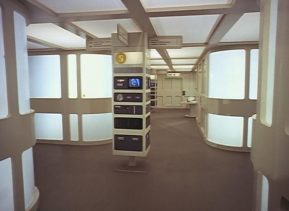 Still fairly practical, despite the seventies chic, and not likely to trip someone up every few meters with the often seen obstacle course of bizarre bulkheads.

And don’t even think about doors. Doors in the future will slide, rotate, dilate, fold, bisect, aperture, off-center rotate, unfold and in all directions (sometimes simultaneously), but no door will ever just, hmmmm, open. Hell, that would be far too simple. The fact that many of these “future doors” move or rotate into places where there wouldn’t actually be space for them? Let’s not go there.

So, if you’re thinking about designing some future architecture, please try to remember that people have to build it, maintain it, use it, and oh yeah… live in it–whether they’re human or alien.