Update From A Pale Blue Dot

I mostly talk about writing and astronomy on this blog, as those are among my main interests, but these topics aren’t disconnected from the rest of events happening in the world. Astronomy not only gave us an unprecedented knowledge of space, it also provided us with our first real understanding of our position in the universe. And it was a humbling perspective.

“We succeeded in taking that picture, and, if you look at it, you see a dot. That’s here. That’s home. That’s us. On it, everyone you ever heard of, every human being who ever lived, lived out their lives.”

“To my mind, there is perhaps no better demonstration of the folly of human conceits than this distant image of our tiny world. To me, it underscores our responsibility to deal more kindly and compassionately with one another and to preserve and cherish that pale blue dot, the only home we’ve ever known.”

The fact is that now, over 20 years after he made this address we are still not looking after the world and the consequences of that are truly frightening.

Recent news is a mixed bag, in the Netherlands the national railway is now operating its trains on 100% electricity generated from wind power. A great example of hat can be achieved. Yet, at the same time, reports show that the global average tax  on petrol/gasoline has dropped by 13 percent over the last 12 years–leading to subsequent increases in consumption, and the release of even more greenhouse gases.

Despite the recent news that renewable energy supplies are now cheaper than fossil fuels, there are still only limited attempts to switch over. The obvious question is–why? The obvious answer is “powerful, vested interests” in the fossil fuels industry. This desperately needs to change.

Although astronomers have now identified over a thousand exo-planets, not one of these is known to be suitable for harboring life. Even if they did tease out the information that one of the planets can sustain human life, thy are so remote as to be unreachable in any but the most long-term view. Using our  current technology reaching Proxima–the closest star–would take us thousands of years. Even if we had some unexpected breakthrough, we would still be talking hundreds of years to transport people there.

Earth is it. Our only hope for the foreseeable future. We need to protect it, so that it can nurture us until we develop sufficiently to move into the stars. If we don’t, the result will be extinction.

Some people think we can’t afford to take the measures necessary, but the real question is–can we afford not to? 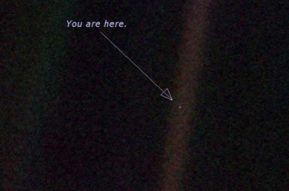