Today, I’m pleased to announce the release of my latest S.F. novelette, Fenton Treeby Is Missing. This one came about under unusual circumstances. Free copy to the first person who guesses where the name Fenton Treeby comes from! It was fun to write and I hope it’s equally fun to read. Here are the cover and back-cover description. 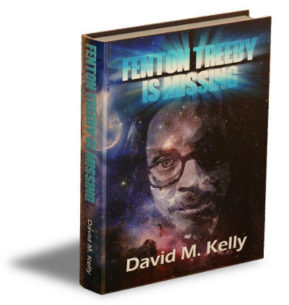 An entire town has vanished. And so has the world’s greatest scientific mind, Fenton Treeby. The Internal Security Bureau wants answers and fast.

ISB Agent Steve Boardman is assigned to the case, but it’s his first week back on the job after recovering from severe PTSD. To make matters worse, his assigned partner, Lynna, is as busy trying to prove he’s crazy as she is looking for a way to pin the disappearance on the Pan-Asians.

Boardman has another theory. One that might be just enough to confirm Lynna’s idea that he’s cracked up. Can he prove her wrong and keep himself together long enough to discover what really happened to Fenton Treeby and the town?

And, if that isn’t enough to intrigue you, here’s a short preview.

I sat at my desk and switched on my workstation. It felt strange even though I’d done it countless times before–that’s what five months away does for you. While it started up, I clipped a small shoot from the miniature Shimpaku Juniper in front of me and sprayed a light film of water over the foliage.

A flood of alerts popped up on the screen and I worked through them, discarding most as routine. Then I saw it–an alert from a ReconSat–coded “Treeby.” That one I had to investigate. I opened the news monitors and asked for a report of the latest from Rabbit Lake. I wasn’t too surprised when nothing came up–it’s that kind of town.

Next I accessed Skywatch. When the latest images appeared the water-spray fell from my hand and clattered on the desk. I cursed and tried to dry my pants where the water had spilled. The images were so outlandish I knew I’d have to interrupt my boss. Bad timing as he’d be watching re-runs of “The Wongles Show.” Rumor had it that he’d only ever missed one episode, while he was being operated on for cardiac failure.

“What is it, Boardman?” Darius Nail’s artificial eye stayed fixed on the screen while his real one glanced at me for less than a second. He was already suspicious of me, not entirely without reason and no doubt the damp stain on my crotch must have filled him with confidence. “When did they let you out?”

“First day back. You need to see this, Chief.”

I opened the first image on my DataPad and dropped it on his desk. A ReconSat picture from twenty thousand showing a town clustered around a cheery blue lake glistening in the afternoon sun. He barely glanced at it.

“Rabbit Lake, California. Yesterday morning.” I was still dabbing at my crotch.

“Is there a point to this?” He barely looked at the picture.

I swiped to the next image. “Rabbit Lake this morning.”

The town was missing. The lake was missing. In its place was a round earth-colored feature that looked suspiciously like a crater. For the first time since I’d entered his office the Chief actually gave me his full attention.

“Presumably at home.” I tapped the image.

“Location reports?” He was already writing something on his workstation, the Wongles immediately forgotten.

“None. No traffic or communications going in or out of Rabbit Lake since early this morning.”

“Is that…?” The Chief pointed to the crater-like image.

I shrugged. What a day to return. We had nothing to go on. Any speculation would be pointless.

“You’re Treeby’s case-officer.” The accusation was as clear as it was wrong.

“I was his case-officer. I haven’t been since…”

“No-one has been. He refused to put up with another ‘babysitter’–his words. This has nothing to do with…” The Chief looked away, then grunted something incoherent. “You know him better than anyone. Get down there and find out what happened. Fenton Treeby… how the hell will I explain this to the Chairman?”

The last time I’d seen Fenton Treeby, he’d been at his house telling me why there was no point trying to explain his work. He almost never left there, and when he did it was only to stroll around his home town. He’d been called to the capital several times, but Fenton simply ignored the orders. I remembered how his glasses perched on his sharp nose and felt ill. Knowing it was all in my mind didn’t make it easier.

“Any sitreps?” The Chief had pulled up Treeby’s dossier on his workstation. “What was he currently working on?”

“He’s never filed that many.” Treeby thought they were a waste of his time. He was probably right. He usually was. “None, while I’ve been… away.”

The tips of the Chief’s ears turned a charming shade of pink. He was going to be in a lot of trouble and he knew it. Anyone of Fenton’s importance should be monitored at all times by an agent who filed regular reports. The silence in the office seemed to buzz louder as minute stretched into minute. Finally he spoke–his teeth grinding so loud it was audible from two meters away.

“I want you on site in ninety minutes and a preliminary assessment within two hours. Find Fenton Treeby or someone’s head will roll.”

And I knew exactly whose head he was most concerned about. I was in the clear completely, though I was sure the Chief would welcome the chance to take a few people with him.

The Chief’s artificial eye zoomed in on me.

“You can’t cover this alone. Take Stockard. In case you… the situation, needs a woman’s touch.”

The hairs on my neck bristled. Some of the Chief’s views were more than a little out of date. I was already at the door and murmured my agreement, walking away without looking back.

Read more or buy on Amazon