Mary gasped as her legs were ripped from under her and she slammed face down into the ground. Several tendril-like vines wrapped around her arms and legs and she instinctively pulled against them. Thorn-like bristles clawed at her burnished skin as the vines coiled tighter around her, despite her struggles.

She rotated her head one hundred and eighty degrees and simultaneously reversed the movement restrictions on her joints. She was now effectively lying on her back, which she hoped would give her a better idea of what was happening.

She was only forty-three minutes into her ground survey of ST2398-5 and had seen nothing unexpected—just the ever-present vegetation they’d detected from orbit. Plant life wasn’t unusual on planets inside a star’s habitable zone and was typically a minor threat to her armored body. Toxicity might be a cause of concern for humans, but not Mary.

She flexed her limbs, but the leathery tendrils tightened further. Her enhanced strength meant she should have been able to break free easily, but the net of vines resisted like titanium ropes. An oily liquid dripped from the barbs onto her skin, its alloy surface hissing as it turned to powder, allowing the claws to dig deeper. Mary cursed at the damage signals she registered as pain. If she didn’t free herself, she realized, it was possible the animated vegetation might actually damage her, despite how absurd that should have been.

Even over the SLink, there were a few seconds before he responded and Mary fought to keep the tendrils from immobilizing her further. It was impossible though. The plants swarmed around her forming a vermilion carpet and more thick vines wrapped around her chest and midsection, the acid secretions burning their way towards her vital areas.

Her skin sensors incongruously popped up a diagnostic of the liquid eating away at it. A mixture of hydrofluoric and nitric acids along with several other compounds that were logged, but would need further analysis.

“On my way.” Ben sounded calm. The way he used to before they’d joined the CySap program and become an explorer team. Since then he was given to emotional outbursts on occasion, something she’d never had to deal with when they were simply an ordinary married couple.

Mary electrified her skin hoping the charge might deter the vines and it did momentarily, but after a few seconds the plants gripped her even tighter. It was enough so that she could raise herself to one knee, but couldn’t lift any further, and the tendrils threatened to pull her flat again in a few seconds.

She scanned the sky looking for Ben and relaxed a little when she spotted the fast moving point in the sky. As he approached, his hull caught the feeble sun and his engines provided a dramatic halo of flickering light. He’d always been an impressive sight, she thought, even when human. It was one of the things that originally attracted her to him and right now it was especially welcome.

Mary froze the image so she could share it with him later, her confidence returning with his arrival. It will be okay now Ben’s here, she thought.

“Head down, Munchkin. Step One. Save the lady.”

His words were accompanied by a sliding whistle and Mary smiled. She stopped fighting the vines and curled into a tight ball, closing her optical feeds and sealing her external ports.

Ben swooped low. Flame units fanning in a wide arc that seared a broad section of the vegetation, leaving Mary in a clear charred area thirty meters across.

Ben wolf whistled and Mary glanced around. He’d banked and turned hard, rocketing back in her direction as soon as he lined up. The plants weren’t about to give in so easily though and as Ben closed they slithered across the blackened earth towards her once more. She knew there was no way he’d be able to land, pick her up, and still get away. They’d both end up trapped.

Ben throttled back until it looked like he was almost floating, like a Magellan Kestrel catching an up-draft before stooping to attack. Mary saw a bright flash from his underside. Something coiled around her mid-section and, as the first of the wave of plants reached her again, she was tugged into the air by the magnetic line Ben had shot down.

“Would you care to climb aboard, Madam? You look kind of silly dangling with your ass in the air.”

“At least I still have an ass.”

“True. Though my aft storage is my ‘ass’ and much more practi-” Ben let out a low whistle. “What the hell is that?”

Mary looked back to where she’d been trapped. The plants were now climbing on top of each other, forming an inverted cone shape that writhed and pulsed rhythmically as it weaved further into the air, stretching towards them.

“Weird, but they don’t have a hope of reaching us,” she said.

As Ben spoke an intense electric flash ripped through the skies around them, black clouds forming almost in an instant. Wind and rain buffeted Mary and she almost slipped from the line. Coiling it around her hand, she started hauling herself up towards the hatch, fighting to see clearly through the barrage of water lashing at her.

Ben screamed as a double bolt of lightning struck him. One bolt hit on the starboard side of his streamlined fuselage, the second stabbing one of his sub-c engines.

Mary held on tight as she was whipped through the air by Ben swerving violently. The lightning must have hurt him badly to cause such wild maneuvers, she realized. The flight stabilized and she clawed frantically at the rope, knowing that he had to keep his speed down until she was safely inside.

Another bolt struck Ben and he grunted, but held his course. Mary grabbed the edge of the hatch and heaved, throwing herself bodily through the opening and thumping the button to close the hatch.

“Punch it, I’m in,” she yelled and the airlock wall slammed into her back as Ben triggered maximum thrust.

For thirty agonizing seconds the decontamination sequence locked the inner door. As soon as it opened Mary sprinted through the tight corridor into the main control room. She threw herself into the acceleration chair that dominated the area, banks of glowing systems monitors forming a wall in front of it.

“What’s happening?” Mary quickly glanced at a number of sensor displays, but in her panic everything seemed a jumbled blur.

“Accelerating. Altitude 11,000 and climbing. The storm is following us.”

“Following? How long till we’re safe?”

“Exosphere boundary in just over two minutes. We should be clear of any atmospheric phenomenon there.”

Booms of thunder shook Ben’s superstructure and Mary jumped in her seat. She pulled the straps tight across her body, something she rarely needed to do.

“You sure know how to impress a girl,” she said.

Mary wasn’t sure later if Ben announced “zero” or not. An intense burst of light flooded the cabin and she instinctively covered her eyes. The room filled with a high-pitched sizzle that overloaded her audio and made her head ring. Ben lurched violently, then recovered. Seconds later the light and noise faded and Mary saw the comforting darkness of space engulf the external display screens.

“You okay?” Mary unlocked the harness and slipped out of the seat. She checked herself and fingered some of the welts burned through the titanium ceramic layers. This is going to be expensive, she thought.

“Ben?” He hadn’t answered her and several minutes had passed, an eternity for SLink communication.

Ben sounded almost like a child when he finally spoke and Mary wanted to wrap him in her arms and hold him until it went away, but that was impossible. Ben was the whole ship.

“Don’t worry. Whatever it is, we’ll fix it.” A moment of fear hit her, and she struggled to keep her SLink neutral. “Can we get back to Haven?”

Again the response was slow. “I think so. I lost a sub-c engine. Some of my control circuits are damaged. There’s damage to the hull, but the FTL drive is okay from what I can tell. Mary… some of my Cynetics aren’t working properly.”

Mary revised her estimates. This was going to be very expensive. The Cynetics interfaced between the human brain and the hardware they controlled. Without them a CySap literally couldn’t function—especially Total Conversions like Ben and her. 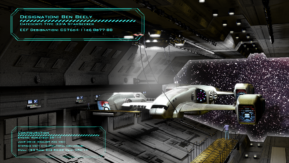