Today I’m sharing a post from Dianne Lynn Gardner, the multi-talented author of The Ian’s Realm Saga on the intricate and spell-binding topic of fantasy map-making.

High fantasy can be confusing. It’s little wonder that readers find the inclusion of a map a welcome relief. I know as a writer, it definitely makes it easier to keep track of my characters and which way they are headed.

But map making has also become a beautiful addition to fantasy literature. Not only does it help the readers understand where a story’s characters are traveling, what sort of dangers lie ahead, and illustrate the fantasy world’s terrain; fantasy  map making has become an art in itself. Many artists, and authors, devote hours and hours of meticulous study while creating maps for books. Nowadays, maps are also a big part of the gaming world.

So who are the cartographers who make these maps?

It seems that there has been such a demand for world building and map making that software companies are actually cashing in on it. Just what the maps look like that these programs create, I couldn’t tell you, but one trip to Google will pull up a few pages of software map makers.

I personally like the ones that are labored over by candlelight with a quill. The ones that are written by hand on some kind of crinkly folded used, burnt corners and all, type of parchment as in days of yore. The kind of map that could have been pulled out of a bottle floating in the ocean, or lifted from a treasure chest that had been buried a hundred years. I wonder if a computer program can make such a piece of art.

Pictured here is an original historical map that charts the voyage of a merchant ship in the 1800s, shown to us by the Hawaiian Chieftain on a discovery tour a few summers ago. 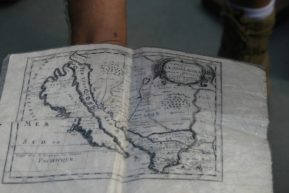 There’s a young man that lives in Australia who makes such maps. John Renehan chooses to create his maps by hand, in ink. You’ll see the one that he did for the Ian’s Realm Saga below. 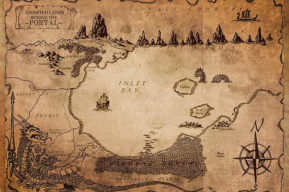 Book 4 Diary of a Conjurer can also be found on Amazon, while book 5 in this series is currently available for pre-order.

Dianne’s Diary of a Conjurer (book four the Ian’s Realms series) can also be found on Amazon, while book 5 is currently available for pre-order. You can find out more about Dianne and her writing on her website. Thanks, Dianne!