Drones are fascinating technology and these days seem to come in all different sizes and prices. People are flying them racing them, using them to film movies and weddings. You name it and there’s probably a plan to use a drone for it.

Apart from the sheer pleasure of flying one of them there’s also the lure of technology behind them. Drones wouldn’t exist without it in fact. The ultra miniaturized GPS and accelerometer sensors that makes smartphones work is also what enables drones to be so small and feature-rich.

Recently my local library held a “Lunch & Learn” event for people to meet some local drone operators and, being the nosy type I am, I went along to learn more about these flying techno-marvels.

The session was hosted by Matt Mackinnon an enthusiast and UAV business operator for several years. Matt has a wide knowledge of his subject and was happy to answer any and all questions. Not only does he fly, race and operate his drones, but he also builds many of them himself!

Rules on drones vary considerably.Here in Canada the regulations are maintained and enforced by Transport Canada and are mostly designed to ensure safe operation. This means that any use of drones near highways, buildings or airports is strictly controlled. Somewhat strangely provincial parks are also included in the list of areas where operating a drone is restricted and requires special permission.

Of course these are the very places where that people would think of first when planning to fly their drone. The fun of taking pictures or videos of your house or a natural beauty spot is a strong attraction and as a result many operators are skeptical of the regulations. To highlight the dangers, Matt gave a vivid demonstration of how even a tiny drone can be dangerous.

To make matters worse there are also two different sets of regulations. One for recreational use, that treats drones as “model aircraft” and the other for commercial use which treats them as unmanned-aerial vehicles (UAVs). If you are flying purely for fun, then you come under the rules for model aircraft, but if you operate that same drone in a manner by which you (or anyone else) receives a monetary gain (or equivalent), then you fall under the commercial UAV regulations.

Where I live we are surrounded by a lot of lakes, and each of these is a potential landing spot for a floatplane (seaplane). As the rules say you can’t operate a drone within nine km of an aerodrome, this really limits where you can legally fly.

hen there are the concerns about possible privacy infringements. As technology produces smaller and higher resolution cameras, these concerns are only likely to grow and this compels owners to operate within the rules to avoid further restrictions.

The informal lunch and learn explained many of the basic rules surrounding drones and was really informative and fun. It was nice to be able to actually see –and hold –all of the drones on display and get a better understanding of what’s involved. The only slight disappointment? We didn’t get to see them in action–but then we wouldn’t have been legal! 🙂 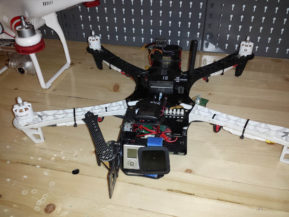