Cleopatra the alchemist was born in 3BC in a small village near ancient Alexandria and was raised as an equal with her two brothers. During the mass zombie uprising in 8 AD, she and her brothers fought in Ptolemy’s Army of Light.

During this time she became an expert horse rider, sword fighter and was proficient with the Egyptian composite bow. Despite her youth, it was said that she could shoot a zombie in the eye from sixty cubits (approximately thirty meters or one hundred feet). 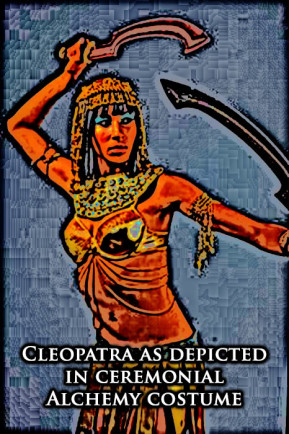 After the war, Cleopatra studied under Miriam the Prophetess and learned the essentials of chemistry and medicine, building on the practical knowledge gained fighting the Zombie army.

Female scientists were common at the time, often working in the areas of chemistry, biology and medicine. Cleopatra herself performed many experiments and wrote several books on poisons and  cosmetics. She also discovered a number of acids using specialized airtight containers that she manufactured herself. She was said to be one of four women who were capable of creating The Philosopher’s Stone (Along with Miriam The Philospher, Medera and the legendary J.K. Rowling.)

Shortly after establishing her own research laboratory, Cleopatra invented a method of fermenting horse dung which was then used to heat the rooms where she worked. She also invented the Alembic, a type of still used to distill and purify chemicals which laid the grounds for modern experimental chemistry and moonshine production. She was also a pioneer in furnace design and worked to quantify alchemy by introducing standardized weights and measures.

Alongside her alchemy work, Cleopatra became a renowned horse-trainer and won the Grand National horse race. She was also known as a wild, passionate woman and seduced both Julius Caeser and Richard Burton, before winning several Oscars.

Much of her writing was destroyed by Roman and Christian leaders, hostile to science and only her “Chrysopoeia of Cleopatra” survives, in which she explored the philosophy of alchemy. It contains many symbols of practical alchemy such as Ouroboros, the snake that eats itself, a drawing of the kerotakis, a chemical apparatus and various star symbols.

When she was entombed, inscribed on her sarcophagus was the legend:

Which can be translated as “Death to zombies!”

(Note: As few documents survived discussing the life of Cleopatra the Alchemist, some of the events depicted here have been dramatized, but are accurate in spirit, if not fact.)