How to make an almost free latte.

Ahhh yes… Will Shakespeare said that music was the food of love… but we all know that it was a steaming cup of triple Mocha that got him moving in the morning. Writers and coffee go together like… like… coffee and writers. It’s safe to say that if you find a writer, you’ll find a caffeine addict lurking too. It’s caffeine that both soothes our conscience when we decide to really stick it to our characters and also gives us the chutzpah to kill off our darlings when necessary.

My own relationship with coffee started when I was quite young. Despite being born in Britain, the dreaded tea-drinkers paradise, I always preferred coffee. This was reinforced through college taking Computer Science classes and then bolstered further during my career as a software developer, team leader and project manager. All of these positions required liberal quantities of caffeine, even if it didn’t say so on the job spec.

So you see, coffee was a firmly implanted vice long before I started writing full-time. Of course, the other common writer trait I share is that I’m an extreme miser. Again quoting Shakespeare, “Verily, doth Starbucks be of an unseemly expense.”

My own specific vice is the latte. Very simple, I don’t want some strange flavoring, or chocolate sprinkles, or an umbrella with fruit stuck in it. Just deliciously creamy frothy steaming hot latte. MMMMmm paradise in a cup! So go to Starbucks or any other coffee emporium and a Latte will cost four bucks a shot, maybe more depending where you are. When you add that up, if you buy just one cup per day, you’re spending over a thousand dollars a year on coffee! Think about it. How many important things, like books, could you buy for that!

So I do what most miserly coffee drinkers do. I brew a pot of regular coffee and drink that. It hits the spot in the morning, it works it’s magic suitably…

But it’s not a frothy, heavenly -*Latte*- (imagine harps and angels singing…)

Oh well, beggars can’t be choosers. I’m certainly not going to replace the cost of buying a year’s worth of Latte’s, by buying an outrageously expensive coffee machine for at home…

But it turns out I don;t need to. They’re not so hard to make in fact. So easy in fact that even Will Shakespeare could have afforded to start a coffee shoppe himself.

First you need to find a way of making some coffee in limited quantities; because you probably don’t want to drink Latte’s all the time (do you?). My solution was simple; a very inexpensive cafetiere (sometimes called a French or coffee press). Like this: 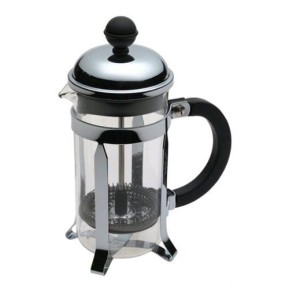 I found mine at a local store on offer for about $15 bucks.

Next you need to get one of these little doodads. It’s called a milk frother and you can pick these up cheap too, maybe $10 bucks. 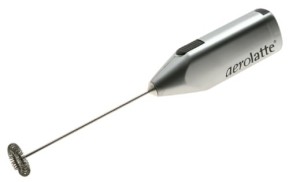 Now, get your cafetiere and put in about a couple of teaspoons of your favorite coffee.  Adjust to taste of course, but you want a nice strong mixture to offset the milkiness. The coffee doesn’t have to be anything special; your regular coffee will probably do, but you could try different ones if you want to go even more exotic.

Now boil up enough water for however many cups you’re making, then leave it to cool for a couple of minutes (don’t add boiling water to a glass cafetiere, for obvious reasons). Stir the water and coffee, then leave to brew for a few minutes.

While the coffee is brewing. you make the key ingredient, the delicious foam! Take about the same volume of milk as coffee. You’re looking for about a fifty:fifty mix at the end. Stick this in the microwave in a cup or beaker and zap for a couple of minutes. Don’t allow the milk to boil over, or your wife, partner, significant other, will expect you to clean up the mess (ask me how I know…) . Now take your milk frother and insert it into the hot milk, moving it in and out until you’ve whipped up a damn good foam (why does that sound kind of kinky?).

Once you’ve done that the coffee will be ready, so press the plunger down on the cafetiere to filter the coffee, pour into a cup, then add the frothy goodness on top and there you go. Odds bodkins! Your very own delicious latte! It’s that simple and takes maybe five minutes max.

I add a little vanilla to the milk, and I also double sweeten it to offset the stronger coffee. But a little experimenting will soon get you a perfect cup. What finer treat can there be on a morning? (or any time.) And the cost? Pennies.

And here’s one I prepared earlier. 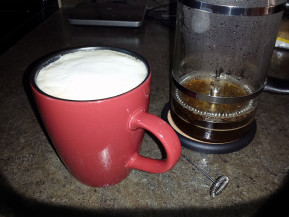 Shakespeare would be proud.

P.S. Full disclosure – I was forced to make a cup especially so I could take the pictures for this blog post… 😀

P.P.S. Wake your partner up on a Sunday morning with one of these and they’ll be impressed!