The wonderful Katheryn Caffee invited me to be part of her October blog hop, showcasing a selection of talented indie authors. The first of of my featured authors is Jena Baxter: take it away Jena!

Born in Ojai, and raised in the San Fernando Valley, California, Jena always loved to read and dreamed of writing a novel. Having the ability, but lacking the confidence to do so, she enrolled in the UCLA Writer’s Extension and soon her first novel was in process. Jena writes YA fantasy, historical fantasy, and paranormal romance. She is also a screenwriter and reads for a screenwriting contest annually. When she isn’t writing she spends her free time with her husband, amazon parrot, and toy Maltese.

A teenage girl enters a carriage in Central Park and disembarks in Victorian, England.

Cursed by her sister Brooke, Alexis Powell arrives in the Victorian Era where she meets Ezra, a man recently murdered by an assassin his brother Amos, hired. Now he’s a supernatural creature and with a touch Ezra sees into Alexis’ mind. Intrigued by her memories, Ezra offers Alexis his help only to be rebuffed for his kindness.

Alexis runs away, but Ezra can’t shake off what he saw. He follows her through the streets of London, but vulnerable after the loss of his Father, Amos’ harassment, and Alexis’ many rejections, Ezra eventually decides to leave her alone.

Alexis is unable to find work and threatened with starvation. She steals a tomato and Ezra finds her facing the local magistrate and an angry mob. He fights and pays for her freedom.

Finally accepting the help Ezra offers, Alexis moves into the manor he shares with his brother. Romance blossoms but the bond between Ezra and Amos is worse than Alexis’ and Brooke’s. While Ezra and Alexis seek a way to send her home, Amos looks for a way to kill them. 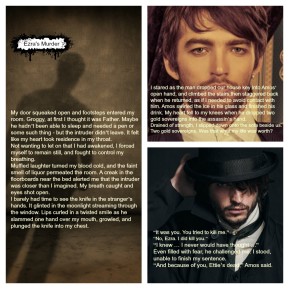 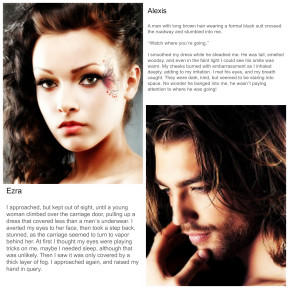