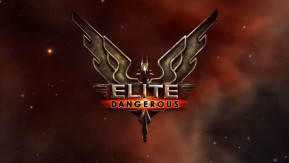 Thirty years after it first appeared the space trading/combat game, Elite, is back in the new release “Elite Dangerous” and what a return it is. Stunning graphics, mind blowing levels of detail and more options than you can shake a high quality joystick at (more on that later).

I have to confess that I invested am awful lot of hours playing Elite when I was younger. The game was awesome even then. Sure the graphics were minimal (though advanced for the time) but it gave you an incredible  sense of freedom, flying around the infinite volume of space; trading, fighting and bounty hunting – all while pursuing the lofty heights of “Elite” status.

Okay, so it wasn’t actually limitless. There were eight “galaxies”, each with two-hundred and fifty-odd  star systems, so just over two thousand in total. But each one had individual data on planetary information, population and inhabitants and it certainly felt unlimited at the time when most games had a few dozen game levels or locations.

When I saw that the game was being remade by Frontier I was initially overjoyed, but then I remembered the failures of earlier sequels and thought they’d just screw it up yet again.

Nevertheless I did end up joining the beta program to get early access to the game. I was a bit put out that I had to pay $70 to become a “tester” but the whole development of the game was crowd-funded so this was obviously part of the financing model.

My first attempts at using the beta software were not encouraging. For several weeks I simply couldn’t run the software as it wouldn’t download and install. The Frontier servers seemed slow to the point of non-functioning at times and you couldn’t play the game without first signing in and receiving new updates (not even in single-player, which is what I was mostly interested in!).

Finally, after many frustrating attempts, I got on and started playing the game a little. I’m now playing the full non-beta version just released last week and my impressions were very mixed.

First of all the attention to detail is really incredible, the 3D graphics are incredibly well done and large structures like space stations and other ships are exquisite in their detailing. Space itself looks simply beautiful and you could be forgiven for just floating around for hours slack-jawed at the panoramas around you.

The features have been extended significantly from the original. For one thing when you dock at a space station you now actually enter it and can fly around inside. The effect is more like something you might expect to see in a movie or TV show not a game.

No matter how visually stunning though, it all comes down to how well it plays and here is where the first cracks started to appear for me. Not that the game plays “badly”, but the controls are incredibly complex. Sure, there’s a lot to control, as part of the “immersiveness” you kind of expect that, but it seems that they’ve retained the “realistic” flight-model from the sequels, rather than going back to the original simplified (but fun) version. This later flight-model received a lot of criticism years ago so it seems a strange choice.

That said, perhaps that’s what everyone wants now and it’s just me being an old fart, out of touch with modern game playing. After all I haven’t played a game “seriously” since… well, never mind when. It was a while back for sure.

I dragged out my old dust covered joystick and that imptoved things but still I felt like I needed a degree in spaceflight to be able to play the game effectively. I gave up several times but kept going back, trying to get familiar with the numerous controls and even managed to launch and dock successfully. But it was all far too frustrating (not to mention time consuming) for my taste.

It was a real shame. I wanted to like the game so much and wanted to play it but the experience wasn’t what I would call enjoyable. Perhaps it’s just that my priorities have changed too much and I can no longer justify putting so much time into something that is just a “game.”

So I decided it was time for something new. My old joystick was clearly limited in this new environment. So I decided to get a new stick and see if that would help. After much comparing and checking out reviews I selected the Saitek X55 Rhino HOTAS, hoping that it would be enough to at least get me past basic combat training. Did this revolutionize my Elite experience? Find out next time.