In the first part of this two-parter I talked about my first steps on the hunt for the Ultimate Portable Writer’s Tool (UPWT). As I mentioned, the EEE PC is good but far too big.

My solution to this was the Samsung Galaxy Player. Samsung categorizes this device as a “media player” but to call it that is like describing a Ferrari Berlinetta as simply a “car” – the words don’t tell the whole story by a very large margin. This is an Android device and like an Android phone the level of functionality in it is quite amazing;. GPS, G-sensors, WiFi connectivity (no phone or 4GS connection), built-in MS Office compatible apps and an amazing amount of 3rd party apps covering everything you can imagine and possibly more, including the SoftMaker suite I mentioned earlier.

Surprisingly it fails against the ancient Jornada in some major ways. The on-screen keyboard is okay and the large screen size helps in this regard, but there’s no way I could spend such long sessions as I used to with the trusty Jornada. Also, the battery life is nowhere near as good in it’s default state at around six or seven hours. This can be extended by switching the wi-fi and GPS off but still seems weak against the thirteen year-old Jornada! 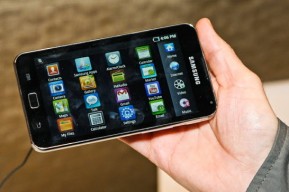 The Samsung Thing (as I call it ) worked well until I got to the point that I needed a cellphone. I didn’t really want to carry two devices around so I looked around to see what was available in the same format, having enjoyed the Samsung that was my first point of call. To my surprise the Thing is now no longer available. What’s more the format itself seems to have been superseded completely. I picked up a Motorola RAZR that is superficially similar but isn’t as big, compromising the keyboard further. The Samsung Note II is a similar size but again seems to be coming to the end of it’s life judging by availability and still suffers from the keyboard issues and I’m sure has the battery life issues (The RAZR certainly does).

One device I looked at a long time was the Sharp Zaurus, which was similar to the Jornada though smaller. The problem with them was that they were very difficult to obtain outside Japan and also ran a Linux OS, putting them fairly firmly in the realm of geekdom limiting its appeal. Sadly the Zaurus  is also no longer available.

So yet again I am looking for the ultimate writer’s tool and feeling as frustrated as I have for many years with the lack of a good solution. The ultimate portable writer’s tool is certainly doable with today’s technology, but it doesn’t exist so far as I know. The specs of such a machine would be something like this.

The instant-on Windows might be a little tough, as well as actually just a full version of Windows on a mobile device (MS seems to love bloat!). I’d probably settle for an Android version if that was all that was practical, though that would rule out some of my favorite writing software. Cost wise I’d want it south of $400. Oh and since I’m dreaming you can throw in an unlimited data plan for $10/ a month!

I’m sure someone could build one. If they did they’d have at least one guaranteed sale! Sometimes in fits of madness I think about building one myself. So if anyone out there knows of such a device, please let me know and put me out of my misery!