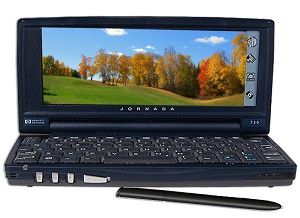 n looking for the ultimate portable writer’s tool for 1126 years, give or take a thousand years or so… An easy goal you might think given the abundance of technology available. But the Quest has not been so straightforward.

Back in 2001 I found the Hewlett Packard Jornada 700 series, which was truly awesome in this role. It was a clam-shell half-screen format that when folded up was about the size of a tall notebook and could fit in a pocket without too much difficulty.The Jornada had three great features going for it that have never been replicated to my knowledge. First, the keyboard was fantastic. It was 75% of a full size keyboard with a good positive action and feel that made typing extremely easy once you got used to it (even for me with my rather fat fingers!). Secondly the wide screen was perfect for viewing a good full width chunk of text. You could (and I did) use this set up for hours on end without any eyestrain or other discomfort, which leads us to the other great feature, battery life: In the days well before current all-shiny Lithium Ion battery technology the little Jornada could get a good nine hours of solid useable life.

On top of this the Jornada was robust, all solid-state, no moving parts here! Not only that, it was also “instant-on”, no waiting for the device to boot; perfect for those spare five or ten minutes or just ready when inspiration struck. I wrote my second novel on the Jornada, around 130,000 words, in unedited form, so clearly working with it wasn’t a problem. It came with a built in web browser, all standard MS Office applications (in a cut down but useable form). It could connect to networks wired or wirelessly (through an add on card and no 4G or phone capabilities back then). Although storage was internal and limited it was expandable through CF cards. There was also a built-in voice recorder, sketching tools and even a plugin camera was available.

The Jornada had some bad points. For one it was expensive, and it also ran Windows CE – a cut down version of Windows that required specially written applications so you couldn’t simply use standard Windows applications. There were a reasonable selection of these available, including a very good word-processor (MS Office compatible TextMaker, which is still available for desktop/cellphones as SoftMaker Office) but unfortunately the price of the devices limited the market, making conversion of applications a less attractive option for software writers. The platform also suffered from  lackluster Microsoft promotion and marketing and as a result the “App Market” didn’t really get going.

My next portable writer’s tool was an excellent ASUS EEE PC laptop (which I still use on vacations and other long trips). The EEE is essentially an undersized laptop or in marketing jargon a “webbook”. 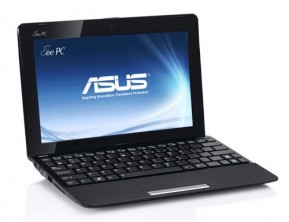 I’ve had great success with the EEE. The keyboard and screen are bigger than the Jornada naturally and it comes with full-blown Windows so you can run any software that runs on a regular computer (it doesn’t have the power for high-performance apps). I’ve struggled a little with the keyboard, which is 90% of a full sized one. That seems to be different enough to cause problems but not small enough to adapt fully the way I did on the Jornada. It will also run my current favorite writing software, Scrivener. Battery life is outstanding with real-world usage giving twelve hours plus.

The real problem with the EEE is simply size. Although it’s a small laptop, it’s hardly what you might call pocket-able. This limits it’s use and isn’t something I can really use easily at work or tuck into a pocket for casual ten minute situations.

So the EEE doesn’t cut it as the ultimate portable Writer’s tool (UPWT) – I need something far more portable. The Quest continues…