About a week ago I was in a bad place. Things are a bit tough at work right now and I’m finding it difficult to focus on writing. It’s the kind of thing that happens to everyone at one time or another, whether on writing or other projects.

Like many aspiring writers, my ultimate goal is to be able to work on my writing full time, but also like many, I’m not in that position right now. When I feel stressed and the writing isn’t progressing very well, I often have “ideas” for ingenious (and not so ingenious) ways of making a living that would make me instantly rich, independent, and devastatingly handsome all at the same time. Oh hang on, I already am devastatingly handsome… 😉

Anyway, when I was in my funk, I came up with the flowchart below to help me with my decision process. 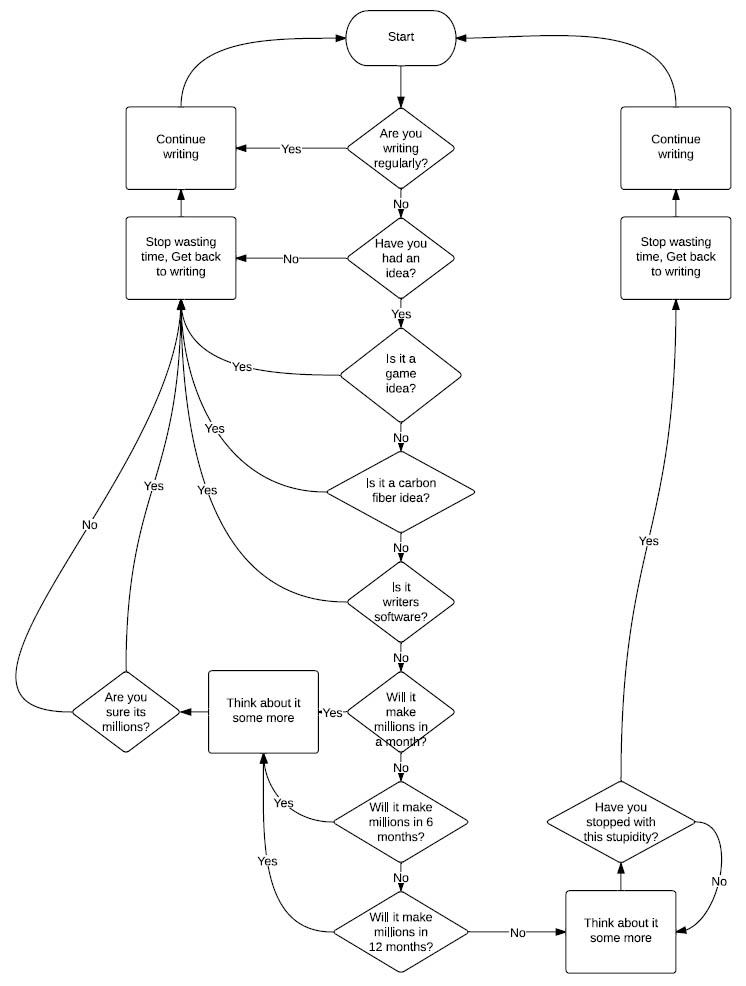 Obviously this is a somewhat humorous decision making process, but documents fairly clearly how my mind gets out of shape at times like this. I showed it to my wife who laughed (proving its humorous state!) and there was no more.

Skip forward to last night, when we watched Galaxy Quest –  a fantastic pastiche of the Star Trek movies and actors. It’s a great, FUN movie and always makes us laugh even though we’ve seen it several times now. One of the lines delivered by “Jason Nesmith” is the movie tagline “Never give up, never surrender!” which is a good line for the film’s plot but also delivered in such a way as to bring guffaws to the fore(tm).

So what has this to do with today? Well, I was answering an email about a Corvette part and thought, how cool it would be to make the part with carbon fiber? I immediately in a rush of optimism emailed the idea to my beloved, knowing beyond a shadow of doubt that she would be similarly enthused.

Her reply was simple and direct:

“Never give up, never surrender, and never forget your flow chart…”